In February, I attended a meeting at HARG that included a talk and demo by Chris VK6FCGB on using the FM repeater payload on SAUDISAT 1C (SO-50). Satellite work is definitely in my ham radio hobby plan, both because of the technical challenges and my remoteness from other hams here.

The repeaters in satellites are usually cross-band in order to avoid the need for large cavity duplexes in these micro satellites (about 10kg mass and 23cm cubed). This is the case for SO-50, having a 2m uplink on 145.850 MHz and downlink on 436.800 MHz. It orbits at about 630 km high and completes an orbit every 97 minutes. Due to it’s immense speed, the Doppler effect on the downlink frequency needs to be taken account of; starting about 10kHz up as it approaches from acquisition and winding up about the same down as it sets.

It is allegedly possible to work SO50 with a hand-held radio with the built in whip, but I doubt anyone has much success with that. Certainly not much power is needed so a hand-held is fine, but a directional dual band antenna is highly advisable. I’ve recently acquired an Arrow portable yagi – 3 element 2m and 7 element 70cm for this purpose. The ‘Arrow’ name comes from the fact that the antenna elements are manufactured from aluminium arrow shafts. 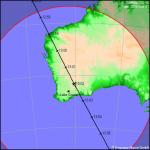 With a long weekend Monday holiday (thank you WA day!) and a 73º altitude pass predicted, today was the perfect opportunity to give it a whirl. A bit of planning is required. Several websites such as Heavens-Above and Satview will give you the details of each pass. To also have the pointing information live in the field I also used an app on my iPad (HamSat) and Android tablet (Predict).

The Arrow 146-437 has separate antenna connections for each band. This is a good thing as it allows you to listen on the downlink full time with one radio while you transmit on the uplink. I used a scanner to monitor the 70cm downlink, with the settings to allow 5kHz tuning steps. The idea is you are able to hear your own voice from the satellite repeater, this is especially important if there’s no one already on so you can be sure you are pointing in the right direction.

In addition to aiming the antenna to hunt out the signal, its necessary to rotate it to the correct polarization. The satellite is tumbling slowly as it orbits, so this is just a matter of constantly rotating the antenna whilst listing to the downlink for the strongest signal. Your arms (I had to keep swapping) get something of a workout.

So with two radios, two tablets, a note book, a voice recorder and a compass it was quite a production to get set up.

I had some success in that I was able to copy a QSO between VK6XLR and VK6AS near the end of the pass. I was surprised that when I transmitted that it completely de-sensed the receiver I was using. As I was packing up it occurred to be to have a careful look at where I was transmitting – I was stupidly transmitting on the downlink, instead up the uplink, frequency – so that’s that mystery solved.

I probably also need some practice of tracking the satellite, I must have been looking in the wrong place for most of the pass. Certainly, I was surprised each time I looked down at Predict and saw how far SO-50 had moved. I should be able to practice this by trying to track any of the other satellites outputting telemetry in AX25. Predict announces some of the azimuth and elevation information by audio, so another future improvement might be to make a little mixer so I can hear both on my headphones.

I also found myself juggling a fair bit of gear, in particular I was not happy about dangling my transmitter by the antenna socket while I adjusted the downlink frequency on the scanner. I might program one of my BF-888S‘s for the receiving job. As they don’t have a display, they have a voice announce of channels (in English or Chinese!) That way I could leave it on my belt. It would also avoid the problem I had with the scanner buttons getting pressed as I shoved it into my pocket. If I make my transmitter coax a bit longer, that can clip on to me as well, and I’ll use a speaker microphone.

This was fun, and I feel I’m not far off having some success, so I will definitely be doing some more of this. I just have to wait for another high SO-50 pass on a weekend!