I went out for my first shot of HF operating today had had some success as well as learning a couple of lessons.

The set up was at a local lookout – it has a slight elevation compared to town, it’s out of the

noise (nearest power-line is about 400m away) and partially surrounded by the salt lake that the town is named for. The lookout has an iron railing that is perfect for strapping my 7m squid pole to. The plan was to hook 20m of wire from that down to the back of the ute and run it as an end-fed.

Lesson 1 – there is only so much tension that can be placed on a squid pole before it snaps.

So, I ended up with a six metre pole but the east/west antenna at the east end was probably seven or eight meters up from ground level then sloped down to my ute where I had set up. As my 40m dipole at home tunes up on a couple of bands, I was hoping this arrangement might be multi-band as well, but no luck there.

In any case as soon as I tuned up on 20m it was clear this was a whole lot better from a noise point of view than at my house. I don’t want to say the noise was S1 – because I don’t quite understand the interaction of my S meter and the RF gain control, but it was substantially quieter. Tuning around the band I found plenty going on – several eastern states VK’s rag chewing and some DX from ZL, Germany and Spain. There was a very quiet but readable portable station in Florida, VE2MW. He was the first operator I heard who was ‘only’ running 100 watts into a modest antenna. Everyone else I heard discussing their station had big beams and high power.

A little later I heard a really nice signal from Peter G2YT in England chatting to a VK5 who was running 100W into a mobile whip. From the conversation it sounded like Richard VK5ZRY had initially made the contact with only 2.5W, so that cheered me up a little and I decided to have a go.

I heard a Spanish station Juan, EA5CTE finishing up a QSO with a ZL, so keen for my first ever HF contact I answered his CQ. He was clearly struggling to make me out, but after several tries with a partial call we got through our calls, names and a signal report. Since I was obviously such a small signal at his end I was very grateful – Juan persisted; getting me to repeat things long after I guess most would have given up.

Almost immediately after this I tuned back up to where I had heard Peter & Richard and they sounded like they were finishing up. I glanced over at my tuner, wondering if I’d need to retune, then remembered: I hadn’t reset my power after tuning – I’d completed my first HF contact with Juan in southern Spain on only 5W! No wonder the poor bloke had to work so hard to make me out. I feel bit bad about it.

Lesson 3: Although it’s good practice to tune up with low power, you need to wind it up again after. 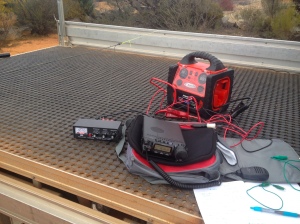 As I set my radio back to 100W, Richard signed off and Peter called CQ. I answered and was thrilled to hear his reply. He had to work a little hard at the start of the QSO (I was 4-4) but we had a lovely conversation and he was suitably excited about being my second HF contact. I think we probably chatted for 15 minutes or so and he struck me as a terrifically nice guy.

So, all in all, a great day. My first HF contacts both DX and both operators who were nice enough to work at pulling my mouse-powered signal out of the noise, especially Juan for working an unintentional QRP! I hope to become the sort of skilled and caring operator on HF that these two blokes are.